It has been a long time that I wanted to write a total custom appearance for Qt applications. My experience with Qt’s CSS stylesheet was not very good, and I stumbled upon Phantom Style, by Andrew Richards, a custom-made Qt style that improves from Qt’s Fusion Style. Its look and performance is pretty good. So I decided to write my own, in a more modern fashion. And it’ll be the occasion to add dynamic theming. Here is a picture of what it looks like with the default colors, on Windows on a standard DPI screen: 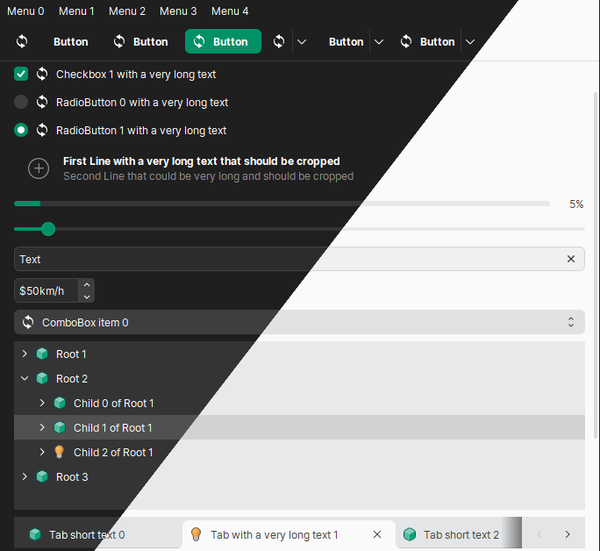 What we’ll be handling, apart for (obviously) drawing widgets on screen:

QWidget is the class that represents a element on the Graphical User interface. It has thus a visual representation on the screen, and receives events regularly to allow it to update its state. It must be re-drawn on the screen each time it receives an event that suggests a modification of its appearance. For instance, a button will repaint itself when it is pressed by the mouse pointer.

How does QWidget draw itself on the screen?

The drawing of a QWidget is done when the method void paintEvent(QPaintEvent* evt) is called. Since this method is virtual, one’s can override it to customize the painting.

To draw, a QPainter object is needed. This class has the necessary API to draw anything: rectangles, lines, text, images, paths. The common pattern to paint a QWidget is the following:

Note that the painting is made by the CPU, with QPainter’s Raster backend. This has potential implications on performance.

The QStyle class is responsible for handling the look and feel of a Qt application. It provides methods to get sizing information, animation durations,… and last but not least: methods to paint widgets.

For each OS, QStyle has been subclassed and the look and feel of the native widgets have been reproduced. You’ll find QWindowsStyle, QMacStyle, … and so on. Unfortunately, these class are part of Qt’s private API. If we want a custom look and feel, we have to subclass it too.

Note that there is one QStyle instance running at a time, which is set on the application with the static method QApplication::setStyle(QStyle *style). Think of it like a singleton that is accessible from all the widgets.

Why not just using a CSS stylesheet?

Actually, when you use a CSS stylsheet (also known as QSS) on your Qt application, a dedicated QStyle class is automatically created by the QApplication to handle the painting based on the content of the CSS file: QStylesheetStyle. It is a quick way to customize the style of the application.

However this has some drawbacks:

When a QWidget needs to be repainted, its method paintEvent() will be called by Qt’s internal QWidgetRepaintManager. This paintEvent() method will get the QStyle that is set on the QWidget, then use it to draw the widget.

Since QStyle is a singleton-like object, and does not know the QWidget, it needs information about the widget’s state and features. This information is contained by the base class QStyleOption, which is subclassed by all the different widgets. Every widget has its corresponding QStyleOption.

For example, a QPushButton will draw itself like this (basically):

QStyle relies on const methods: they don’t modify the input, apart from the QPainter. They use their parameters in read-only mode, and only call internal draw primitives.

Every QWidget is identified by an enum value, and its current state by a QStyleOption, so the QStyle::drawControl wouldn’t even need to have the QWidget as parameter. It is just there as a way of advanced customizing.

We’ll see the internal workings of a QStyle in the next part.

Qt divides widgets’ visual appearance into smaller interactive parts: subcontrols. These interactive parts are themselves divided into smaller parts: subelements. QStyle provides primitive dedicated methods to draw these elements, instead of a huge methods that would draw the complete widget. These smaller parts are identified by the following enums. It is not clear how they are classified, though.

The enums that define the parts to draw are:

We need to implement these virtual methods, to handle the possible values of the aforementioned enums (Note: the w and p mean that it takes a const QPainter* and a const QWidget* as parameters):

Not only we need to draw the widgets, but we also need to provide size and position information to draw them. Some enums help us identify which part to size.

These enums are used by these methods:

Qt has QPalette, its built-in theming object. Yet, this class is not powerful enough to handle proper modern theming, like we see with current CSS frameworks.

We can create a Theme class to replace QPalette, that would contain all basic values like colors, sizes, animation durations, etc.

A Theme object can be created from JSON (or any data-oriented text files). JSON is conveniant because Qt has everything we need to parse it (QJsonDocument, QJsonObject…). Here is an example:

Note that you have to write parsers to create Qt objects like QColor, QSize, etc. They won’t be all shown here, as they’re pretty straightforward to write, and will depend on your own design and data specifications. I had to write functions like std::optional<QColor> tryGetColorFromHexaString(QString const& str), as instance:

Our QStyle can have a current Theme that it will use to paint. It even allows to change theme at run time, and having everything re-draw.

Since QStyle only gets information about the widget’s state with QStyleOption, it does not have any notion of time, which is necessary for animations. We need a way to store this state.

Qt’s sources show us that the workaround they used is to keeps a HashMap in the QStyle, associating a QObject* to a dedicated object used for handling its animation: QStyleAnimation. It can animates any QObject and not only its subclass QWidget.

When the animation is running and a value (e.g. a QColor) has been updated, it needs a way to trigger a visual update of the QWidget. This is done by sending an event synchronously to the QWidget

Unfortunately, QStyleAnimation is not part of Qt’s public API. We’ll follow the same mechanism by re-making this system from scratch for our own QStyle.

This is what our system needs to do:

The second option might be not the best, performance-wise, but it’s sufficient. Consequently, an animation is handled by the class WidgetAnimation<T> that is a typed wrapper over QVariantAnimation. Typing is useful so we won’t have to write the conversion code lines every time. WidgetAnimation<T> will trigger a new repaint for the QWidget every time the animation value has changed.

To animate a property, we have two options:

We chose the second option as it allow us to have typed methods. A MACRO (not shown here) may help, because the code is the same for all properties.

This method is called at every paint, i.e. for every frame that needs to be drawn.

As you may already known, it is only possible to drawn within the QWidget’s bounds. The QPainter is clipped to its limit, thus can’t drawn outside of the QWidget coordinates.

If we want a focus border that draws outside the limits of the QWidget, we can simply use Qt’s QFocusBorder. Before a QWidget draws itself, the method QStyle::polish(QWidget* w)is called, allowing us to install any kind of behavior on the widget. We use this to instanciate aQFocusBorder` on the widgets we want to have this macOS-like focus style.

This class will call QStyle::drawControl(CE_FocusFrame, styleOpption, widget) to draw itself. We can then check its parent QWidget’s type to determine the QRect of the focus border. We need to do this for every type that has a QFocusBorder.

Each QWidget has its dedicated enum values. Here is a guide to help you with this mess.

A QProxyStyle is a way to modify the behavior of a QStyle by dynamically overriding painting or other specific style behavior. Instead of subclassing a QStyle-derived class, you need a class that inherits QProxyStyle.

The QStyle checks if it has a proxy before each method call, and calls it if so. However, as said in the documentation, there is no guarantee that QStyle::proxy() will be called by the QStyle you override. User-defined or system-controlled styles may ignore their proxy.

Currently, my QStyle doesn’t support the use of a proxy style.

To use a QStyle on a QApplication, it can be done like this:

It was a long and tedious task, but now I have more control over what is displayed by the Qt application. I also see the limits of Qt styling system. Some widgets were particularly hard to get right, such as QTabBar, because Qt’s private code calls the QStyle methods in a specific order that we can’t modify. For the QTabBar, as instance, the tabs are drawn in a specific order and it will impact the shape you may give them.

I made sure that my QStyle library does not contain any company-specific code, so the lib is totally generic and can be used on any Qt application.

I plan to improve it progressively and open-source it, so the Qt community is able to benefit it.